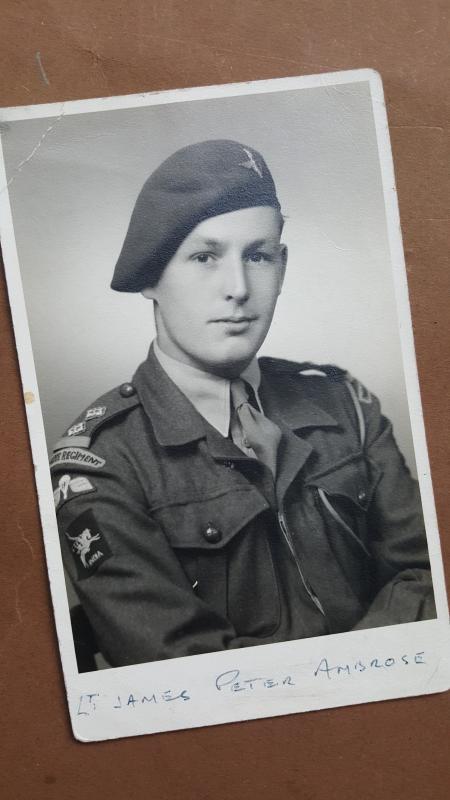 
This is a nice and orginal period made white and black portrait photograph of Lieutenant Peter Ambrose. He served as a officer in the 15th Parachute Battalion which was part of the 2nd Indian Airborne Division. He proudly wears his altert Battle Dress blouse with local made insignia. This small-sized picture - it measures 8.7 cms x 14.0 cms - is neatly printed in a black and white on a ... read more

This is a good example of a printed Wessex Divisional sign. The 43rd (Wessex) Infantry Division was an infantry division of Britain's Territorial Army (TA). The division was first formed in 1908, as the Wessex Division. During the First World War, it was broken-up and never served as a complete formation. It was reformed in the TA in 1920, and then served in the campaign in North West Europe fr... read more

A perfect standard wartime capbadge to the Parachute Regiment

This is a neat example of standard wartime Parachute Regiment beret badge. Heavy quality white metal and in a almost un-issued condition. Has never been cleaned. read more

This is a nicely and un-issued shoulder title to the Oxfordshire and Buckinghamshire Light Infantry. The 2nd Battalion is famous for their actions during the coup-de-main at Pegasus Bridge in Normandy in June 1944 during Operation Overlord aka D-Day. The title is in a good un-issued condition and more of the sought after units. read more

This is a nice example of a issued and removed from uniform Pegasus arm formation sign. First introduced in 1942 and designed by Major E.Seago based on the Greek saga of the winged horse Pegasus and his rider Bellerophon. This perfect issued unfortunately single example is in a good and issued condition. Hard to upgrate and they are getting harder to get now. read more 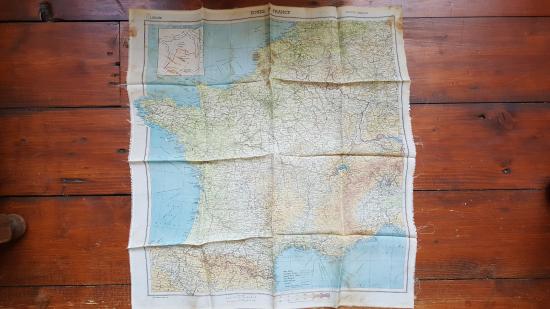 This is a neat example of a scare to find silk escape map covering France. The scale is 1:2,000,00 and is a second edition and was produced in March 1944. These maps were worn by most of the men landing on D-Day including the British and American Airborne Forces and were also issued to members of the SOE who were dropped in occupied France. The map is in a nice and slightly used condition. A ni... read more