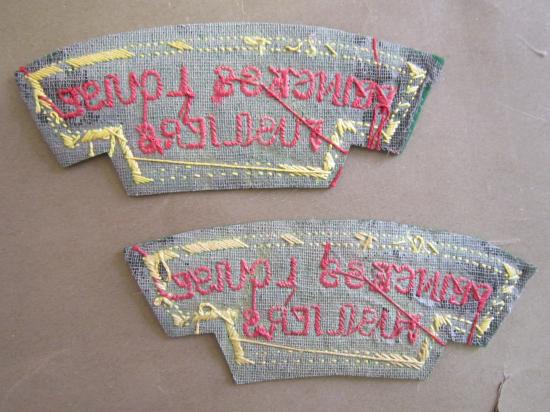 This is neat example of nice and unissued set British made embroided Canadian Princess Louise Fusiliers, 5th Canadian Armoured Division, shoulder titles. As an officially constituted unit of Canada, The Princess Louise Fusiliers were authorized in 1867. During the unit's history, it has undergone several name changes. The onset of World War II saw more action for the Fusiliers, when they were sent to Italy as part of the 5th Canadian Armoured Division. The regiment fielded two machine gun companies, the 11th Independent MG Coy. in support of the 11th Infantry Brigade, and the 12th Independent MG Coy. in support of the 12th Infantry Brigade. In British and Commonwealth armoured divisions of that period, independent MG coys. consisted of a HQ platoon, plus one platoon operating Browning .50 cal. heavy MGs and a second platoon operating 107mm heavy mortars; they were heavy direct-fire support units. In February 1945 the 5th Armoured was transferred from Italy to Belgium, and these two companies participated in the liberation of the Netherlands from late March to the German surrender. During the conflict, the regiment received nine more battle honours, bringing their total count to 16. This set is in a perfect un-issued condition.